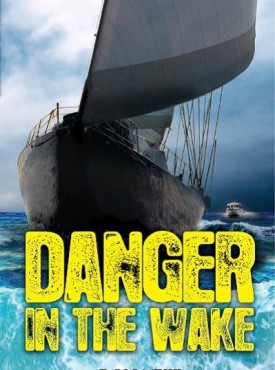 Danger in the Wake

Competitive sailboat racing team John Sebren, 16, and his 14-year-old sister Jessie set out to sail a 41-foot ketch owned by their father’s charter company from the Dominican Republic to the Virgin Islands. The teens are smart, and in planning their adventure, they anticipate every eventuality except one—piracy. When Thomas Holt, a disgruntled former charter company employee, learns of their plans, he recruits two thugs to assist in kidnapping the kids to get even with Billy Sebren for firing him. Following in a much faster powerboat, the pirates keep their distance until the sailboat is far from shore in the middle of the Mona Passage, a sometimes treacherous current referred to by cruisers as the “Moaning Passage”. John and Jessie pull every trick to outsmart their pursuers, including sailing directly into a vicious storm in the middle of the night. In the words of one of the pirates, “These ain’t no ordinary kids.”