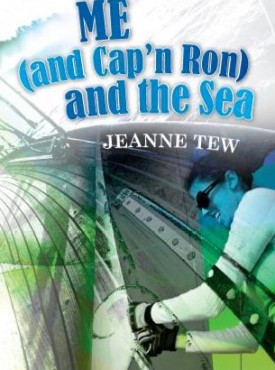 + View Gallery
By Jeanne Tew In Humor, Memoir, and Sailing Tagged In books.

Me (and Cap’n Ron) and the Sea

Whenever people hear we lived aboard a sailboat for four years, cruised in the Caribbean, transited the Panama Canal, sailed to San Diego, and ended our journey with a six-month trip up the East Coast to Maine, they get all starry-eyed. In response, I rave about palm-studded islands, sandy white beaches, emerald water, and dolphins playing off our bow. I don’t tell them that anything short of perfect sailing weather scared the bejeezus out of me and that traveling by sailboat is the slowest and most expensive way in the world to go third class!

In 1997, never having set foot on a sailboat, I cast off with a self-proclaimed adrenaline junkie who filled my head with alluring promises of romance and adventure .Somehow we survived those years together, on two different boats, neither having more than five hundred square feet of constantly moving living space. This is my story of the four months I spent on my glorious yacht and the forty-four I spent on his damn boat. Set your clock to island time, kick back with a rum punch (or two) and come aboard.