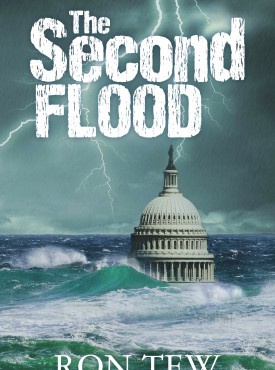 + View Gallery
By Ron Tew In Adventure, Environment, Fiction, and Science Tagged In books and tags.

What’s the worst case scenario of global warming? A two-hundred foot increase in sea level, killing billlions of people and seventy percent of ocean life? The collapse of government and the decline of civilization into warring tribes and clans? In 2024, the Antarctic Ice Cap slides into the ocean, caused by a combination of global warming and a shifting of continental tectonic plates. Prior to the catastrophe, two engineers, Jerry Miller and Hal Jernigan, built Hebron, a high-tech, self-sufficient village on the Tennessee River. The two make for Chicago, the country’s new capital, with a survival plan for the nation, but find the government in chaos. Worse, President Woodrow Wolfe has fallen under the influence of a televangelist who convinces him Armageddon is at hand. In his confusion, Wolfe views the masses streaming into Chicago seeking aid as the enemy. Miller and Jernigan find themselves in an explosive confrontation, with America’s future dependent on the outcome.